Ethical Consumer’s Buyer’s Guide to Crisps in 2009 gave Piper Crisps an ethiscore of 14.5, compared to 11.5 for Golden Wonder and Jonathon Crisps.

Kettle Chips scored 9.5. This may have changed as they were aquired in 2010 by Diamond Foods Inc in the US. Diamond Walnut was the location for the longest union strike in U.S. history as of 2010. The strike began in 1991 and ended in 2005 [ref].

Meanwhile KP and McCoys, being owned by United Biscuits, received an ethiscore rating of just 4.5, with concerns including land rights and fossil fuelled power issues, tar sands involvement, probable use of animal testing and the sale of meat and unsustainable fish.

Walkers, owned by PepsiCo Inc, also rated only 4, with concerns including use of palm oil without adequate remediation, subsidiary blacklisted for environmental violations in China, the worst ECRA rating for animal testing, operations in eight oppressive regimes and subsidiaries in eighteen tax havens.

Pringles Crisps managed to hit an ethiscore of just 0.5, but they are owned by notorious animal tester Proctor and Gamble, with experiments involving transgenic mice and a boycott call by both Uncaged and Peta.

A detailed Ethiscore Report on crisps was published in Ethical Consumer 107 July/August 2007, available to subscribers online. A free buyer’s guide to crisps was updated in October 2009, with the revised scores shown here.

The following Piper Crisps are listed as vegan (by Lembas), with a standard 40g bag selling for 65p rrp.

Stop press: it turns out that this one lists lactose on the ingredients and ‘contains milk’ on the allergy advise, despite being listed by Lembas as vegan. Investigations continue.

A blogger comments: “Aaaah, Seabrook, the crisp of the North! These very, very fine potato chips are largely found north of Watford in the UK, and are vastly superior to any other brand of potato chip to be found in the British Isles. (It’s a known fact.) Plus, they have numerous delicious vegan flavours, including the wondrously ‘meaty’ Canadian Ham, but also Smoky Bacon and numerous other less surprising flavours.”

Seabrook Crisps are an Ethical Consumer best buy, with a score of 14, but sadly not available from Veggies supplier, Lembas.

Jonathon Crisps list only their Sundried Tomato & Basil crisps as vegan, but email received in January 2011 confirms that their Lightly Salted; Sea Salt & Malt Vinegar and Jalapeno Pepper are also vegan, although they are listed on their website as vegetarian rather than vegan.

Sister company Golden Wonder seemed to be reorganising their product info when their website was checked. Product info for the Real Crisps brand is also inconclusive.

Other brands of crisps, including supermarker own brands, may be found in the Vegan Society’s Animal Free Shopper, available from Veggies Bookstall.

From: Talk To Us @ Consumer Services thurmaston.consumer@pepsico.com
Date: 10 September 2010 18:00
Subject: Your Contact About Walkers Crisps

Many thanks for your email. 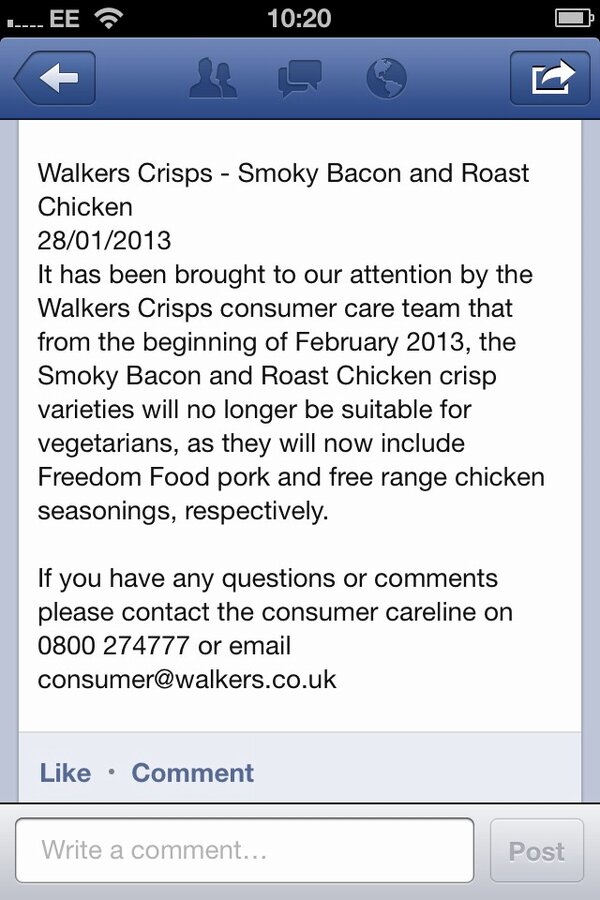 Please Note:
This list is published using the best possible information that is available at the time of compilation. Whilst we take every care, Walkers Snack Foods cannot accept liability for any errors that may inadvertently occur. Recipes may change so always check ingredients on the pack.

We do hope that we have been of help and you continue to enjoy our products. However, if you do have any further queries, please do not hesitate to contact us again on our Freephone number – 0800 274777.