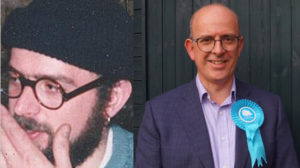 Andy Coles then and now

Why: Andy Coles deceived a teenager into an intimate relationship when he was an undercover officer. He is a city councillor in Peterborough, a position unfit for someone who abuses a role of public trust to violate fundamental human rights.

In May 2017, Andy Coles, Deputy Police & Crime Commissioner for Cambridgeshire and Peterborough City Councillor, was exposed as a former undercover Special Demonstration Squad officer. It was revealed he had deceived teenager “Jessica” into an intimate relationship, telling her he was 24 years old, when he was 32. “Jessica” has said she feels like she was groomed:

“Although not legally underage, I feel that my youth and vulnerability were used to target me. I was groomed by someone much older, and far more experienced… I was manipulated into having a sexual relationship with him. I didn’t even know his real name.”

It is entirely inappropriate for someone who has committed these admitted human rights abuses to be in a position of respect and authority. Andy Coles has resigned his post as Deputy Police & Crime Commissioner, and he must now step down from his post as Councillor as well.

Previous demonstrations have seen a broad spectrum of people attending, and calls for his resignation have attracted cross-party support on the council.

It is important that the Andy Coles and the Council see the public outrage at these revelations. Without this, they may be able to sweep it under the carpet.

Coles is one in an ever increasing line of undercover police revealed to have abused women in this way, and it is essential that we demand accountability for these actions. 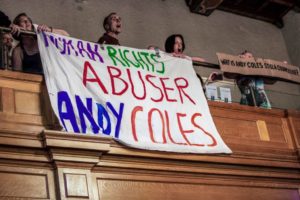