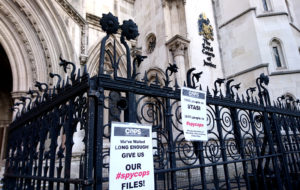 Political policing hit the headlines almost a decade ago, when the activities of Mark Kennedy (aka “Mark Stone”) were exposed in the public.

Since then, the public inquiry into undercover policing has made slow progress – and inevitably become London-centric.

This talk will aim to correct this by taking a look at the fragmentary evidence we have of the history of state subversion of progressive and radical movements outside of London, with a focus on the North East of England.

An update of the progress of the public inquiry will also be provided, followed by a Q&A with Chris Brian, researcher for the Undercover Research Group and one of the many who were spied upon by Britain’s political secret police.