We were pleased to support the National Rally Against Agrofuels at Portland, Dorset on Saturday 25th September, 2010, organised by No Oil Palm Energy (NOPE) and supported by Campaign Against Climate Change, Biofuelwatch and Food Not Fuel .

Coachloads from London and Bristol and individuals from as far as Leeds, Aberdeen and Newport (and Emilia and Pat from Veggies from Nottingham) joined hundreds of local campaigners to march from Chesil Beach Car Park, along the seafront to the narrow street that leads to the entrance to Portland Dock, the site of the proposed plant. 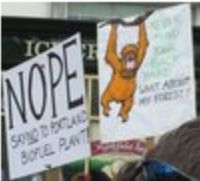 N.O.P.E. is campaigning to stop a biofuel power station being built in Portland, Dorset.

# The plans are to burn 30,000 tonnes of palm oil in diesel engines to produce electricity.

# There are currently problems with all biofuel schemes, with fuel sources competing with food and land used by some of the world’s poorest people, so we are asking that only truly green, clean and sustainable energy projects, like wind farms and tidal, are given government green energy subsidies.

In their article Protesters hope for Portland biofuel showdown on 24th September, the Dorset Echo quoted Nope member Andrew Butler who said: “We’ve already had tremendous local support for the campaign over the past six months and we are delighted that national groups are coming to support us.

“The issue of biofuels is one that should concern everyone because if the plans on Portland go ahead it will open the floodgates for these facilities which would be disastrous for the communities affected at home and abroad.”

He added: “We are determined not to let this happen – we will draw a line in the sand at Portland, we will stop them here and they will go no further.”

Robert Palgrave from Biofuelwatch said burning biofuels was a ‘cheap and dirty’ way for the UK to achieve renewable energy targets.

And Phil Thornhill from the Campaign Against Climate Change said: “It is tempting simply to redirect our huge demand for energy from fossil fuels to biofuels – but biofuels cannot be produced at quantity without vast areas of land. And it is pressure on land that is having devastating human and environmental consequences.”

“A Line in the Sand”

Portland has become a major battleground in the fight against agrofuel (industrial biofuel) power stations in the UK, a judicial review of the planning consent having been refused by the High Court of Justice.

Children and adults attending the rally heaped buckets-full of sand at the gates to Portland Port. ‘A line was drawn in the sand’, sending a message to W4B, the company behind the project, that campaigners would allow their scheme to go no further.

“There is a wave of proposed new agrofuel power stations sweeping the country. The logic of the Portland protest was that if we can stand up to them here, we can stop this wave in its tracks. The headlong expansion of agrofuel (biofuels produced through intensive agriculture ) use threatens to destroy the world’s remaining primary forsts, exacerbate the global food crisis and cause a massive increase in climate-destabilising emissions. We need to make the battle to stop the Portland plant the battle that wins the war against the disastrous expansion of the agfrofuel industry.” See Campaign Against Climate Change demo report

Rather than being a source for ‘sustainable energy’, palm oil contributes to deforestation of natural forests, responsible for as much as 20% global emissions. A workshop on the subject of agrofuels held at the Animal Rights Gathering described the way in which urangutans were seized by hacking off the hands of the young clinging to their parents. Forests are then razed, burning alive all plants and animals from beetles to rare Sumatran tigers. As their habitat diminishes, many of the endangered animals roam into villages or plantations in search of food, setting off conflicts with humans.

This expansion into agrofuels would most likely not be going ahead if subsidies from the government were unavailable. As this method of energy production is classed as renewable, subsidies are available. By employing this system the government is effectively subsidising the destruction of the rainforest in South East Asia and elsewhere, putting natural habitats at risk if not destroying them.

“Deforestation of tropical forests to grow palm oil and other biofuel crops results in vast quantities of CO2 being released into the atmosphere, and leaves behind biological deserts where 90% of wildlife has been lost. Global corporations make huge profits while indigineous peoples are illegally forced off the land.” From “Palm Oil Rush” on london.indymedia.

In it’s report on the rally, “Hundreds protest over Portland biofuel power station“, the BBC report that “W4B has since pledged it will not be using palm oil but has not divulged what fuel will be used instead”.

Agrofuels are Industrial Scale Biofuels. They cause:

Some facts from Food not Fuel.

* Deforestation in Brazil more than tripled since a year ago, largely driven by rising food prices, reversing past improvements (The Guardian, 30/9/08).
* 75% of rising food prices is due to the expansion of agrofuels (World Bank)
* Deforestation and other changes in land use cause at least 18% of global greenhouse gas emissions (Stern Revue, 2005).