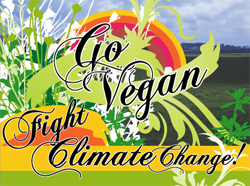 In 1987 Veggies fought off libel action by McDonalds, who then went after the McLibel Two. The ensuing 313 day epic trial and ultimate total victory in the European Court of Human Rights was documented in the film ‘McLibel’, directed by Franny Armstrong.

Franny went on to direct the Climate Change blockbuster ‘Age of Stupid’, which Veggies was pleased to support as part of the Nottingham Not Stupid team that brought the film to Nottingham.

In producing ‘McLibel’, Franny’s Spanner Films invented a new concept of ‘Crowd Funding’, whereby hundreds of ordinary people made an affordable investment in the film.

Now the Crowd Funding concept is (hopefully) bringing a new kick-ass activist film to the screens:

It’s called Just Do It and it’s going to be a feature film about climate change activists, it’s going to be funny and inspiring. Who knows you might even spot Veggies at the now infamous G20 demonstrations in London or at the Great Climate Swoop at Nottm’s Ratcliffe-on-Soar Power Station.

They’re making it totally independently (ie no big backers) and planning to give it to us for free. But money doesn’t grow on trees, so they need our help.

The producers, all climate activists themselves, are seeking crowd funding and Lush are doubling donations. Having benefited from Lush support ourselves we have sent a small donation from the Samosas for Social Change fund, but others are encouraged to go over to their website, check it out, and make a donation.

If you want to see why Lush are matching your generosity, watch of Veggies supporter, Andrew Butler, Campaigns Manager at Lush, speaking at the launch of the fund.