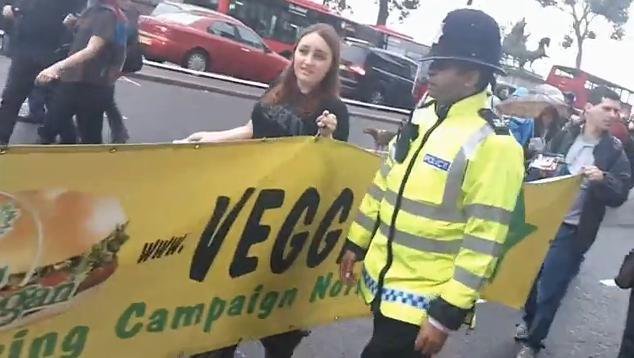 In an amazing show of solidarity and compassion many hundreds marched across the west end of London on Saturday 2nd October, to highlight the plight of farmed animals.

This is the first time that we have held a march for farmed animals in London, and it was a lively day, in solidarity of the millions of animals killed for meat, dairy and eggs, every day.

“Did you know that in the UK alone, around 1000 million animals are killed for meat, dairy and eggs every year? And, that number does not include the fish that are trawled out of the water in their tonnes. None of this is necessary – we do not need to consume animal products.”

Animal Aid Director, Andrew Tyler, spoke of the negative human health and environmental impacts of animal farming but declared: ‘My own argument against meat, milk, eggs, fish and all other animal products arises from my knowledge of the vile cruelty that is integral to these animal product industries. I have seen it for myself during numerous visits to farms, markets and slaughterhouses.” [video] More at Animal Aid’s rally report.

In Viva!’s media release, founder and director, Juliet Gellatley, said: “Viva!, together with many supporters, will be at the forefront of the event, calling for a move away from the reliance on livestock farming, for the sake of animals, people and the environment. It is unbelievable in this day and age that such barbaric and outdated practices, under which animals suffer, are allowed to continue.”

In her speech at the rally, she added: “If one person is unkind to an animal it is considered cruelty, but when a lot of people are unkind to animals, especially in the name of profit, the cruelty is condoned and, once large sums of money are involved, will be defended to the last by otherwise intelligent people”. [video] 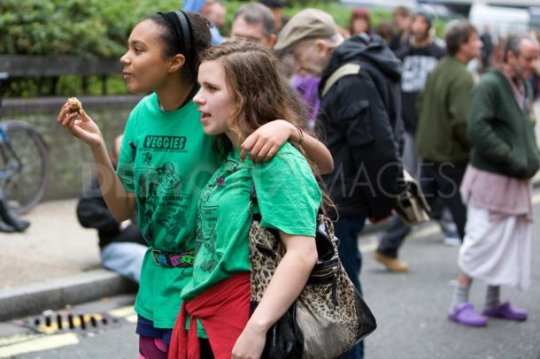 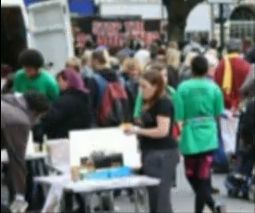 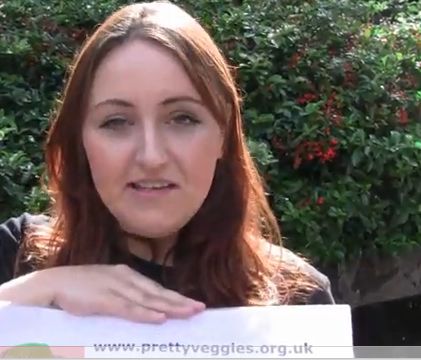 Pretty Veggies from video by Lextorite (at 3:00)

Congratulations and much respect to the organising team.

Speeches kicked off at approximately 12.30 and saw Juliet Gellatley of VIVA! give the first, before Andrew Tyler of Animal Aid, Richard Deboo, Louise Wallis, the former president of the Vegan Society and Kevin White, founder of Midlands Vegan Campaigns, who has just been awarded Veggie Achiever Of The Year.

The march itself began around 1.30 and saw animal lovers from around the UK walk up the busy Regent Street, down through Cockspur Street, down Whitehall, along Embankment, finally into Horse Guards Avenue, carrying placards, banners and leaflets, spreading the word to the general public about the cruelty that happens to farmed animals.

At every McDonalds or Steakhouse the marchers stopped to focus on that location for a few minutes, letting them know that they’re far from pleased at the companies for making a living out of the slaughter of animals, chanting ‘Stop the Slaughter, Meat is Murder’. Although what started out as a sunny day eventually saw rain drizzle, it couldn’t dampen the marchers’ passion. 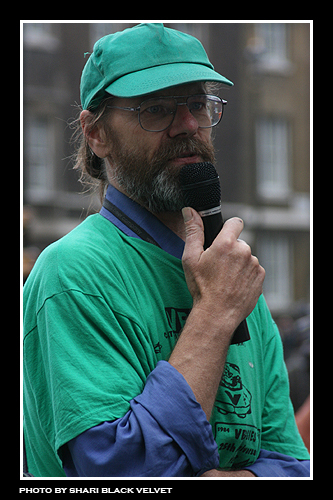 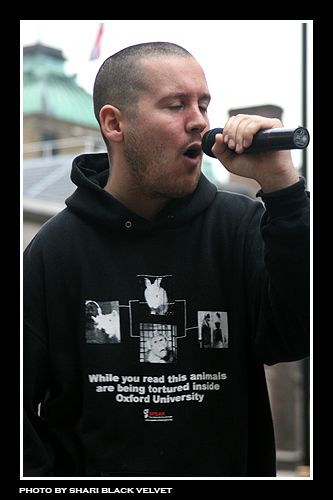 After the two hour long march, a few more speeches took place including one from Chrissy Leyland, one of the founding members of Pogo Cafe, one of our fave vegan cafes (in London), Marion Eaton of F.R.I.E.N.D. Animal Rescue and Patrick of Veggies (vegan catering campaign).

The afternoon concluded with a couple of numbers by Mártin the Livewire, vegan hip-hop / rapper.

The March for Farmed Animals was organised by individual activists, just like you and I.
Can you help with a donation?