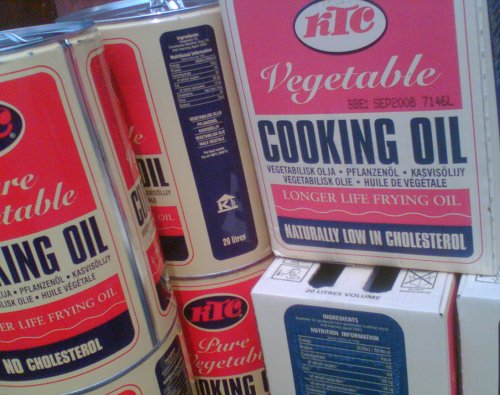 FOOD that has been genetically modified could be on sale in as many as one-in-four pubs, restaurants and takeaways in our region.

Trading standards officers in York found around a quarter of caterers using cooking oils sourced from a genetically modified (GM) food without telling their customers. The same GM oil is on sale, including wholesale to caterers, in Nottingham. Bookers and other catering suppliers have been selling oil identified as GM by very small print on the cans.

The law requires that consumers should be made aware – before purchasing – that the food they are eating is either sourced from genetically modified food or contains genetically modified food, but many caterers may be ignorant of the law, or not carrying out proper checks of their ingredients. They are required to reveal it on the menu or on a prominent notice. It is illegal for them to conceal this information, and they must not wait for customers to ask for it. Failure to comply is a criminal offense. The maximum penalty on conviction in a magistrates’ court is a fine of £20,000.

Any consumers who are at all concerned regarding the inclusion of GM food should specifically ask the caterers when ordering their food whether it is GM, or sourced from a GM origin. The law requires the owner to provide an honest answer.

To spread the work download, print and distribute our handy gm-oil-in-nottingham cards

Linkback to this page: http://tinyurl.com/veggies-vs-gm

Picture from May 2013 Demo Against Monsanto

KTC Oil is distributed by:

On their website at http://www.ktc-edibles.com/ the product is described as “A clear liquid oil suitable for culinary purposes”, with no immediately visible reference to its GM source amongst the many product pictures and listings.

June’09: 20 drums KTC oil, again labelled as made from GM soya, seen on wholesale supply at the Glastonbury Festival, as reported on our Concerned about Genetically Mutated Food? page.

See details of survey in York, “Trading Standards uncover GM food law breaches” at http://www.york.gov.uk/news/latestNews/240342 and bring this to the attention of your local Trading Standards.

This should also concern those using ‘straight vegetable oil’ as an alternative to diesel fuel. This is also an issue in relation to food security as the price of a basic food commodity such as vegetable oil will inevitably increase when used as a motor fuel.
This may be discussed on the http://www.vegetableoildiesel.co.uk

DINERS in Dorset have unwittingly been eating genetically modified (GM) food, according to the county’s Trading Standards service.

A survey of 48 restaurants throughout the county found 13 of them were breaking the law by using cooking oils containing GM substances without telling their customers.

Of the 13 catering businesses Trading Standards officers found breaking the rules, two are in Weymouth, one is in Dorchester and one is in Portland.

Of the remaining nine, two are in Sturminster Newton, three are in Wimborne, one is in Ferndown, one is in Christchurch and one is in Blandford.

Dorset Trading Standards chief Ivan Hancock says he cannot name the eateries found falling foul of the GM laws because of national Freedom of Information legislation and because he does not want to run a ‘naming and shaming’ campaign.

The owner of the Weymouth restaurants found to have breached the rules – Sinan Keskin, of Café Express in King Street and Cafelicious in St Thomas Street – agreed to be identified in the Dorset Echo.

Mr Keskin, 28, said he had not been made aware of the need to tell his customers about the GM ingredients his premises used before the Trading Standards investigation and had now changed the products he uses to comply with the law.

He said: “It was quite a surprise to me to find out about this law.

“Nobody had told us about it and I didn’t know before that I had to tell my customers.

“I’ve now changed the oil I use to a GM-free variety, which costs an extra £2 per container.”

Mr Keskin, who has been running Cafelicious for six years and Café Express for two, added: “There is a need to comply with the law and if this is what Trading Standards want, it’s what I will do.

“I’m not going to argue with that but it seems like it could cover a wider area.

“For example, if a customer comes in saying they want Halal food or
vegetarian food, do I need to tell them that the plate it’s served on may have had bacon on it?

“Or, would I need to tell them that their plate has been washed in the same sink or machine as plates that have had meat on them?
“If I’m going to be 100 per cent above board do my customers have to be told about these things?”

Mr Keskin said he now spends around an extra £16 per week on GM-free cooking oils at his businesses to comply with the GM food laws.