Veggies attended the National March Against the Badger Cull on 1st June 2013.

See report below, with info, links & contacts for you to get involved to Stop The Cull

Only people power and direct action will stop the cull now. If you can, get to the cull zones. If you can’t, please support your local hunt sab group. 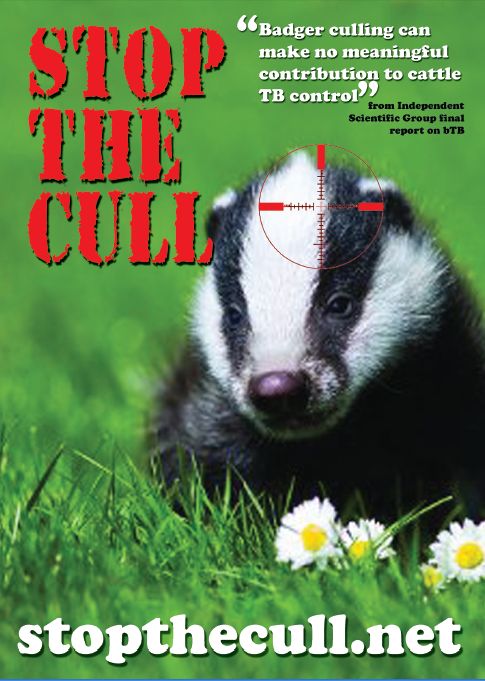 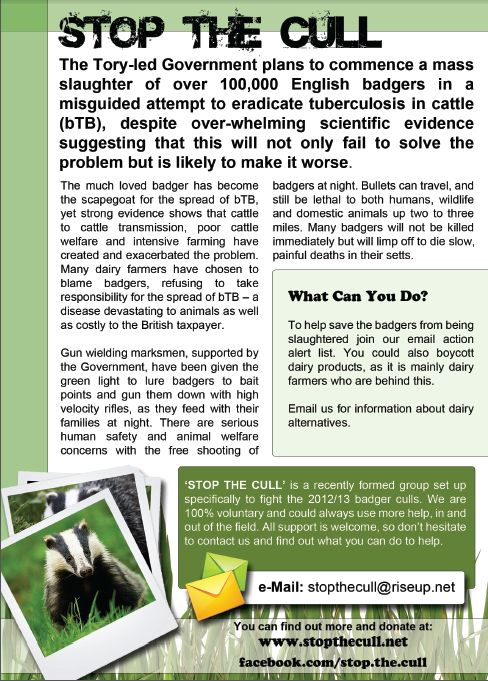 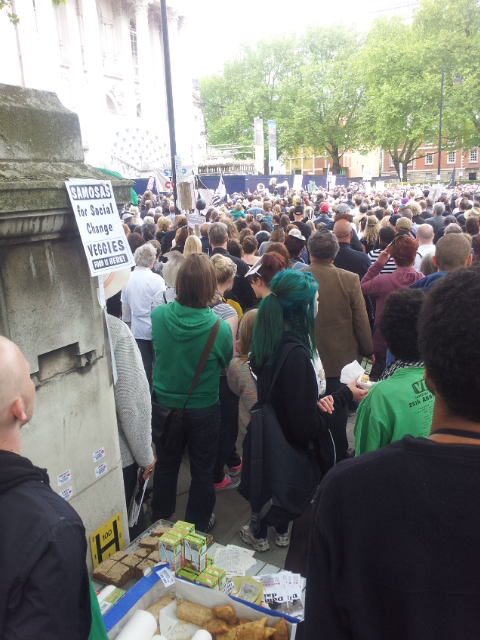 Report from The Merry Veggies Of Nottingham Tumblr Blog

So we at Veggies went down to London yesterday (June 1st) for the National Anti Badger Cull March.

After a long and complicated journey, via trains and tubes (we will no longer be doing full catering in London) carrying as much as we possibly could of pasties and samosas, we sold out within the first hour of getting there!

Speakers included the amazing Brian May of Queen and members of Hunt Saboteurs.

We walked the march to the end point where we then did street side catering with trays of cakes in our arms and on a small table.

Following the music and crowds we ended at the park where the atmosphere was amazing and there were some pretty awesome badger dancers and music! 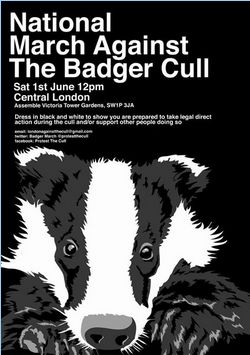 Being as awesome as we are, we then decided to go across to Parliament where the BNP were holding a demo (all 30 odd of them) and joined the Anti-Fascists there.

As several news sites have covered it, ‘BNP get chased through London by a bunch of women dressed as badgers.’ Nice to see that we are all in it together, animal rights activists with anti-fash.

“Save the badgers – cull the BNP”.

Then the long and super-tiring journey back to Nottingham.

What an amazing Veggies day out!

More pictures at The Merry Veggies Of Nottingham Tumblr Blog.

Thanks to Save A Scream for this image. Click to see lots more great pictures: Shari Black Velvet at Save A Scream says:

“Compassionate folk made their destination London on June 1st to protest against the badger cull that UK’s government has despicably already given approval to in the South East of England. Brian May and Bill Oddie took part in the march with the former giving a speech before the march kicked off. He was joined by Kate of Animal Aid, Wasp of London Against The Cull and Born Free Foundation’s Virginia McKenna. Activists, young and old, dressed in black and white with face masks and paint to show their support for the badgers, who do not deserve to be killed. London Against The Cull are calling for badgers to be vaccinated rather than culled.” …more…

Funds Raised to Stop the Cull

By providing refreshments on the streets just for donations, over 200 Samosas for Social Change, over 100 pasties from Screaming Carrot vegan bakery and 100 drinks went in an hour. 250+ cakes soon followed. Thanks to generous support from ‘customers’ over £100 was raised to pass on to friends working to Stop the Cull in the field.

To stop as many badgers being slaughtered as possible during the culls, activists and hunt saboteurs are ready in the cull zones to take every legal effort to put themselves in the way of those engaged in killing badgers. You can support this work with a small (or large) donation, or support your local group.

Another great reason to go – MT:@protestthecull@veggiesnottm will be providing #cakes and #pastries at #BadgerMarch on #Saturday

Ditch Dairy to Stop the Cull

Why kill badgers? No one needs milk. Cows are killed at an unnatural young 4yrs old; just don’t replace them & in 4yrs no more in TB in cows

Why we oppose the cull

“We think that the government and farmers are scapegoating badgers to avoid addressing the real cause of bTB: bad farming practices.

We feel the evidence suggests that intensive farming and the inhumane treatment of cows in the dairy industry is to blame for the spread of this terrible disease.

Cows farmed for the dairy industry live in squalid, over crowded conditions. They are also under tremendous stress and are overworked, meaning that they are very prone to the spread of diseases.

We would like to see the end of cruel farming practices and a more healthy respect for this country’s invaluable wildlife by the government and farming communities.”

The #vegan message is central to the campaign against the #BadgerCull. Join Veggies on 1st June: veggies.org.uk/event.php?ref=… & @protestthecull

Only people power and direct action will stop the cull now.

If you can, get to the cull zones

If you can’t, please support your local hunt sab group

26th May 2013: Campaign outreach against the cull at The Milk Race

2008: Campaign and Demonstration against the Welsh Badger Cull,
including Viva!’s Welsh Day of Action for Badgers.

This work is licensed under a Creative Commons Attribution-NonCommercial-ShareAlike 3.0 Unported License.