Glastonbury 2013 was a big success for Veggies Catering Campaign, especially in terms of our vegan campaign outreach. 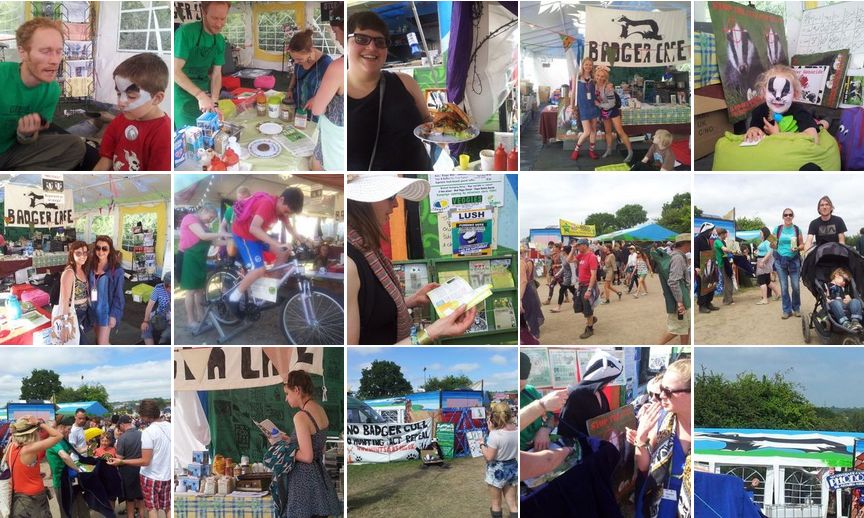 On arrival we found that Veggies was sited at a key location at the entrance to the Green Futures Field, right off the Old Railway Track crossroads.

This was great to catch the people going up the track… 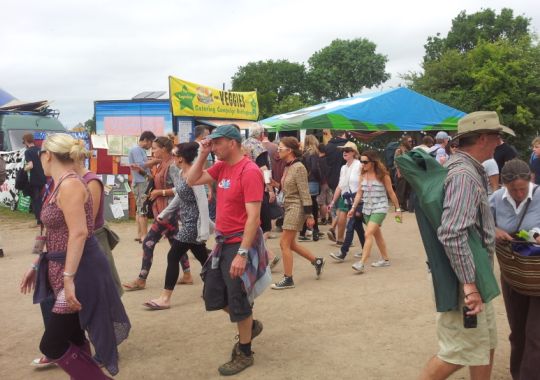 … and those coming back down: 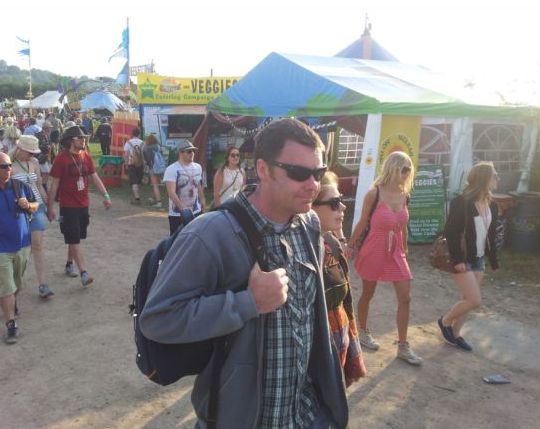 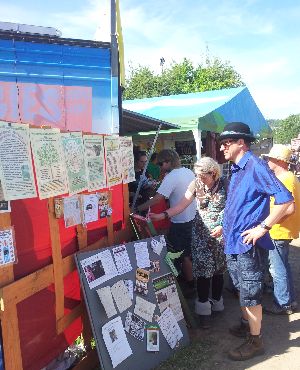 A big part of our mission was to encourage support for the many events that we attend, including Peace News Summer Camp, the Animal Rights Gathering and Reclaim the Power (No Dash for Gas) Action Camp. Veggies Catering Campaign has a unique roll in uniting movements for positive social change, catering at actions, camps and gatherings.

Other campaigns that we support, such as the Radical Routes network and the Movement for Compassionate Living were featured on impromptu displays.

Our location enabled us to highlight other activities in the Green Futures Field, such as the Speakers Forum, which featured the Lush Charity Pot Slam, and the main Green Information Point further up the track:

A special mention too to Zia Solar Systems that helped with the power to keep the foods as chilled as the crew! 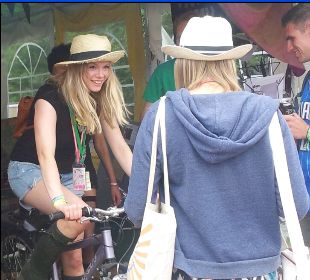 We were delighted to have been loaned a Pulp Friction bike to add d-i-y smoothies to the low-tech, low energy activities at Veggies at Glastonbury. 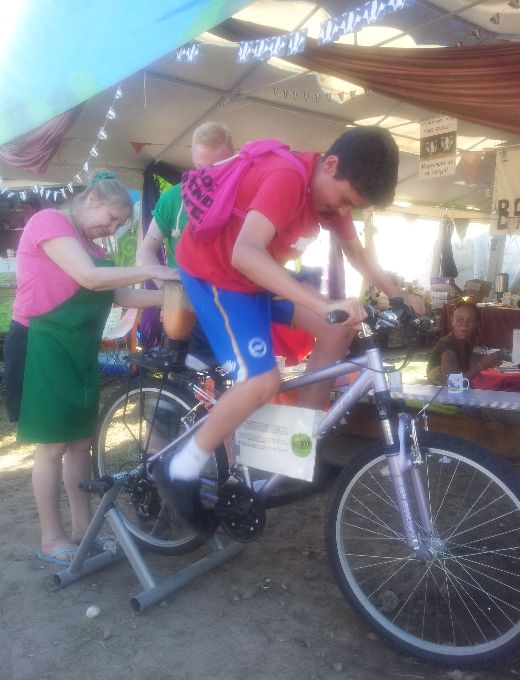 Goody Good Stuff sweets – too Goody Good to walk on by!

We got to see some band… 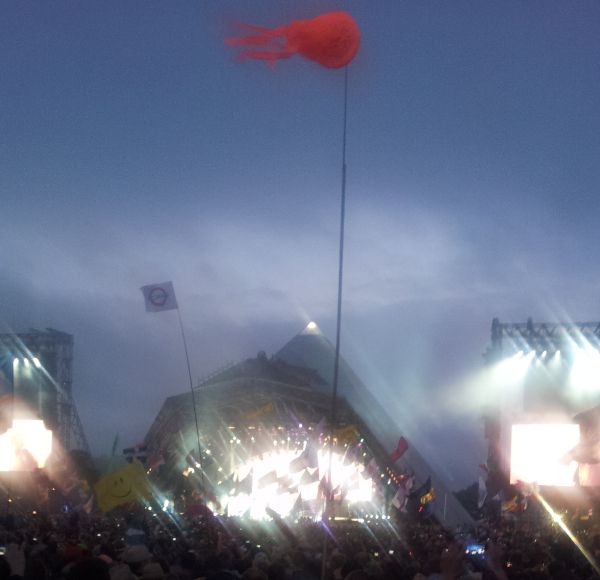 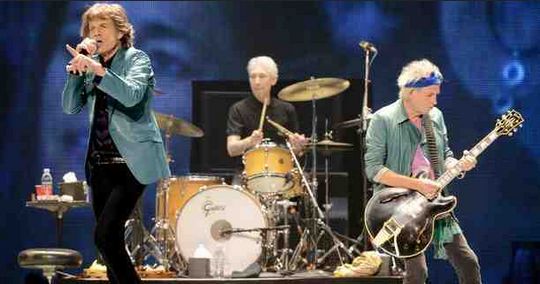 … and slept for a week after! 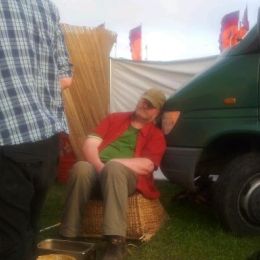 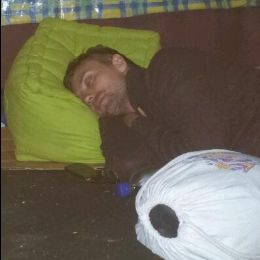 To see how all this compares with our plans and expectations, see our glastonbury-badger-action-cafe posting from before the event. 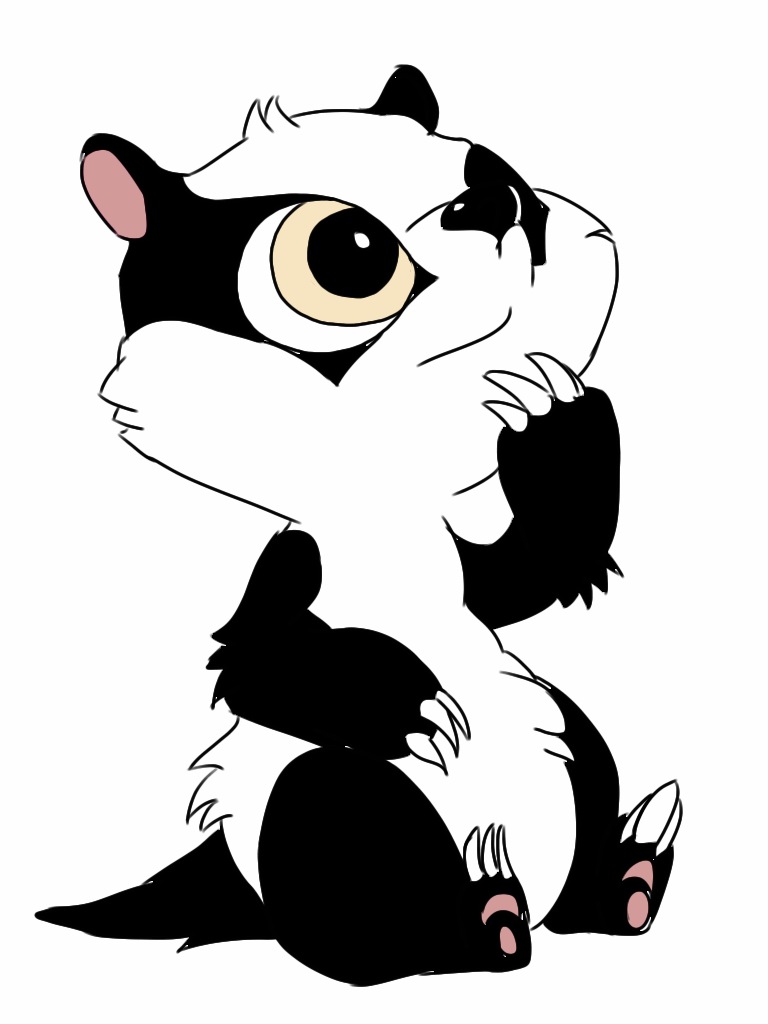 Our crew are reflecting on ways to make this huge campaign outreach mission work even better in future. If you have and thought, please contact us.

– “Well, first and foremost, I think we should totally be giving ourselves a big pat of the back. Couldn’t really ask much more from a team. :)”

– Campaign space worked better than it ever has.

– In spite of some fantastic contributions to the Veggies aesthetic, our frontage and customer lounge still looked like the practical marqueue of a not-for-profit, grass roots, campaigning organization, rather than a slick professional venue (IMHO).

– Campaigning: We need to have recurring activities to draw people in like the smoothy maker, taste testings and other good ideas. They need to be on all the time as well, we had a great campaign space and people came when they could interact in some way, but when there was nothing to interact with the space seemed pretty quiet apart from staff 😉 (its Glastonbury they’ll find other things to do). We need to properly brainstorm interactive things we can have inside the space and practice them before the event (maybe use at regular events as well) and have them running as long as the space is open and draw lots of people in and get them educated or at least give them a leaflet.

– One crew member in the multi-use space just didn’t really work in my opinion, you get pulled into a conversation about the badger cull, giving a milk taster round, prepping fruit for the pedal-smoothie, clearing up the space and sign-posting people to the trailer for their coffee. If you add to that trying to start a burger demo, re-organise the merchandise, checking the honesty pots, facepaint and clean up the relishes table, it makes it impossible for 1 person in a multi-use space to do any one of those things efficiently or effectively.

– People used the cafe space when trailer crew encouraged them to, same goes for campaign space. I think if trailer crew felt more joined up with the campaign space and had those quick conversations whilst burgers were waiting or coffee brewing, it would have got a masses more traffic. It’s the point of contact, if we miss that, we miss the person.

– Integrate not just the trailer into the campaign space but the crew and the whole approach – otherwise we really are just serving burgers to rich festival punters and raising funds for Veggies (which is valid but we can do more than just that):

– The campaign period is shortened with 2 crew on it at all times or better seek funding or other support to be able to extend the campaigning for a full 12 hours each day.

– I also think we should have stayed open until 5am as between midnight and 4am everyone who normally camps out around the main stages is somewhere between Arcadia, Shangra La and the stone circle.

– An additional crew member might be be better used helping in kitchen rather than than trailer, so that more cake, bhajis, pizza, soups, meals etc could be made.

– Chrissy enjoyed cooking crew meals, and didn’t mind working through til 9pm most evenings. Surplus meals might be offered on an ad-hoc basis to customers, subject to availability.

– We absolutely should have had some frontage next to Groovy Movie. We were focussed so much on grabbing attention from the cross roads we were actually closing ourselves off from people coming back down from the stone circle, or in the Green Futures Field.

– We need to think about cake display – we should keep an eye out for a two or three tiered cake display with a cover. I also think we should have had cakes, pasties and cold drinks on a table in the marquee with an honestly pot for those who did come in asking.

– The Indian place down the track was already trading when we arrived so we must be open as early as possible. On the Tuesday evening we were the only people open and we were doing steady trade throughout.

– There were times before and after the main festival was running that crew were hungry and the conventional 3 meals a day hadn’t really been considered and planned in.

– I would have liked to have a daily meeting/briefing during which ideally all crew members get together to:
… communicate the ‘extra-tasks’ and priorities of the day, and designate people to action those so everybody knows what to do and how to help
… raise any relevant issues (concerns, worries, requests for help, big-ups…) in order to facilitate communication and relieve any tension amongst ourselves as well as celebrate our hard work 😎

– The festival officially finished on Sunday night. Some of the team arrived home late on Tuesday evening.

A major part of Veggies work involves supporting the public’s interest in all the new vegan products available. Whilst not able to do sampling we were able to encourage potential customers to taste test the foods on our menu, in particular cheeses and plant milks.

Vegusto with gusto at Glasto! 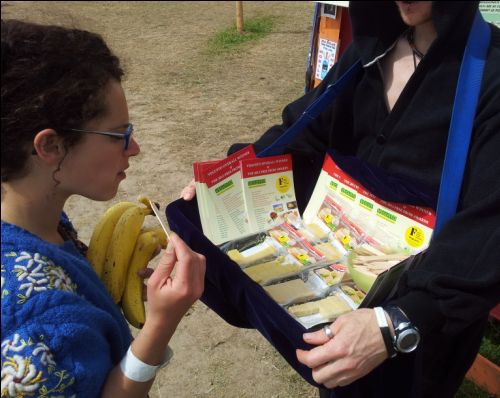 Swiss vegan manufacturers, Vegusto have created a range of ‘cheeses’ based on coconut, rapeseed and sunflower oils, almonds, cashew nuts which really do taste like cheese! And what’s more, the cheeses are not only dairy free, but gluten free, soya free and egg free too. 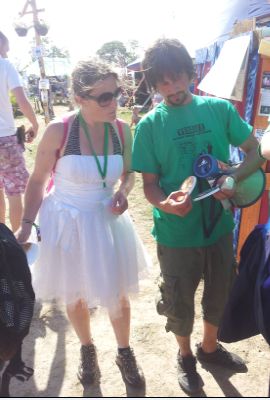 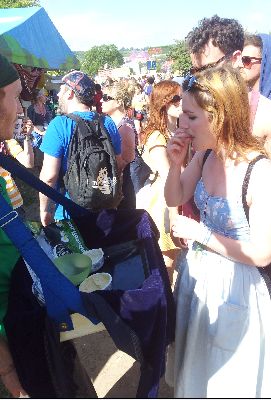