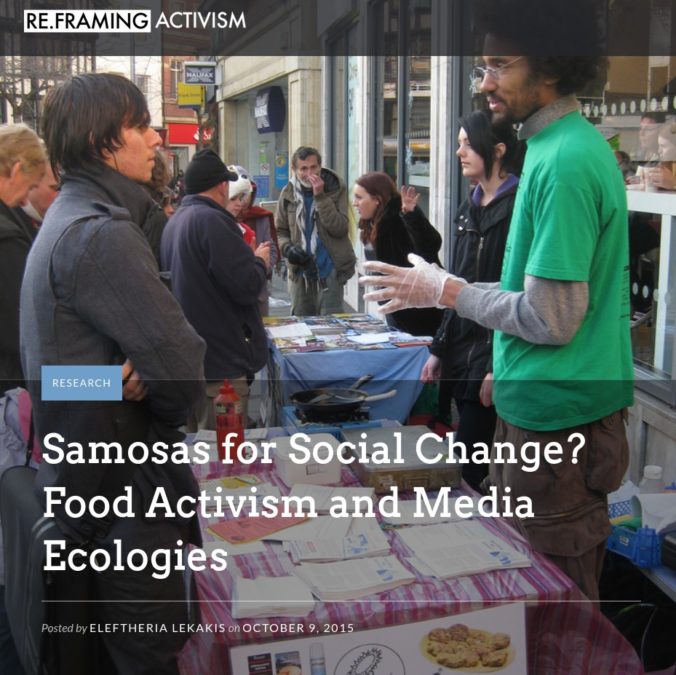 The title of this blog is a tribute to local Nottingham collective Veggies Catering Campaign, who – along with Brighton’s Anarchist Teapot – are two of the UK’s most well-known ‘campaign caterers’. This post isn’t focused purely on Veggies, though, but a long-standing food-activism campaign that some of their members have been involved in, which draws together some interesting issues about how we conceptualise protest media and what the political significance of these conceptualisations is.

In general I want to highlight three things: The first is the difficulty of engaging in what Pollyanna Ruiz (2014) describes as ‘polyvocal’ protest, or mobilizing behind a range of interrelated issues as opposed to campaigning on a single-issue basis; the second is a body of work that explores how activist media practices can be understood as information ecologies (e.g. Treré 2012). The third, and final, thing I’m going to discuss relates to work by Anna Feigenbaum who (both individually and with Frenzel and McCurdy 2013) expands the definition of media beyond conventional communication platforms, in order to explore how other material entities can express (or sometimes constrain) meaning, from the symbolic use of tents in occupations of public space to the repressive use of tear gas to silence dissent. The work engaged in by these researchers has helped me to think through both the conceptual and tactical significance of issues I’ve looked at in my own work, in relation to food activism.

Movements local to me, such as Food Not Bombs and Nottingham Animal Rights, have regularly used food to draw attention to interconnected issues. There are, for instance, regular ‘free food give-aways’ in Nottingham city centre, where vegan food is cooked and served outside fast food outlets as part of long-standing anti-McDonald’s campaigning. What I want to reflect on in a little more depth is how the role of food can be conceptualised in these contexts, as a tool for polyvocal protest.

Veggies’ own What’s Wrong with McDonald’s? pamphlet is still distributed today as a defiant marker of the anniversary of the McLibel trial, and for the past twenty years has worked in conjunction with the McSpotlight website to articulate the series of problems drawn together by McDonald’s. While the pamphlet succinctly listed a range of issues – including worker’s rights, animal welfare, environmental destruction, littering, exploitative/misleading advertising, and unhealthy food – the website provided an in-depth archive of evidence to flesh out these concerns (see Pickerill 2003), with ‘mirrors’ in other countries to avoid fear of libel. The site also contains PDFs of the pamphlet in multiple languages, to enable people to develop local campaigns of their own.

It more recent times, however, the campaign has faced difficulties in maintaining its polyvocal dimensions. Though McDonald’s was initially a useful emblem for drawing together issues and problems, this had its downsides; while the campaign tried to make clear it wasn’t just McDonald’s that was the problem, but what it stood for, the sight of people flyering outside of the restaurant can lead to assumptions that the restaurant is the main target. This is especially problematic in light of McDonald’s recent emphasis on ‘local’, ‘organic’ produce in its marketing campaigns within the UK, which make it seem like any criticisms have been addressed. Though this has been responded to with a new McGreenwash pamphlet, pamphleteering in a specific site doesn’t always make criticisms of the restaurant resonate with broader criticisms of the agricultural-industrial complex or of the commercialisation of public space. In contrast, though McSpotlight does have the capacity to elaborate on connections between different issues in depth, twenty years after the site’s initial buzz, the website tends to be used as a helpful archive of information for activists rather than a platform to communicate with publics.

Food, however, can be a way of overcoming the limitations of both the pamphlets and web-media. Food sharing, for instance, is useful in de-familiarising commercial rhythms in ways that pamphlets alone might not. Quite often if you’re distributing political pamphlets this just seems part of urban rhythms, something to ignore in the same way that you might ignore commercial flyers. Food give-aways, in contrast, evoke surprise that people are giving something away within a commercial space without trying to sell the product, which often prompts further questions and creates space for dialogue. While I have reflected on these campaigns in the past, in a range of contexts (e.g. Notts Free Food 2010, Giraud 2015), I’ve struggled to articulate exactly what food’s value was in more concrete terms. Yes, different tactics reach different audiences (with specific web-platforms appealing to different sectors of the activist community, whist pamphleteering directly engaged with consumers) and, yes, food distribution was a good way of breaking down barriers and chatting with people, but I felt there was something more to say.

When listening to Feigenbaum’s research at the last SoME seminar, however, I reflected that I was drawing artificial distinctions between food sharing (which I saw as a practice) and pamphlets, websites and social media (which I saw as communication). I also often found myself treating these things separately, and reflecting on the strengths and weaknesses of each platform, or how they could work together to compensate for these limitations, rather than taking the more holistic approach that is offered by understanding these practices as being interrelated (as in Treré’s work). If, instead, food is – firstly – understood as media in its own right and, secondly, situated as part of a complex communication ecology, then it becomes possible to grasp its role, and protest potentials, more clearly. In the context of the give-aways, food can be understood as a media which has affordances that emerge through its relationships with the other media involved. To clarify what I mean by this, burgers served in McDonald’s clearly convey different meaning to the burgers cooked outside, which – due to their location, being free and being vegan – communicate oppositional ideas about public space, commercialisation, and animal rights (to give a few examples). The specific resonances the veggie burgers assume, moreover, shift depending on their relation with the other media involved in the campaign, which doesn’t just include the pamphlets that are being distributed but the way the stall is arranged, who is present and what discussions are had.

Thinking through food’s role as part of a broader media ecology, of on- and offline communication practices, is a helpful way of reflecting on the different affordances and constraints of the varied platforms being used, and how tinkering with these relationships could alter these affordances to reach new audiences or make communication more effective. Food, in this context, can be seen as a powerful communicative tool, which both expresses critical meaning, and enacts new – if temporary – forms of social relations. Whilst, in themselves, pamphlets, websites, social media, burgers, or verbal discussion might have their limitations, by refusing to isolate these media and understanding them as part of a complex ecology of communicative practices, the value of different tactics for polyvocal protest can become clearer. The theoretical framings of media discussed here, therefore, are not just helpful for conceptualising activist media practices, but for assessing the context-specific value of different media for communicating complex, interrelated, issues to diverse publics.