Guided by Ethical Consumer research, we look closely at the ethical rating of key products that we use, including soya milk. 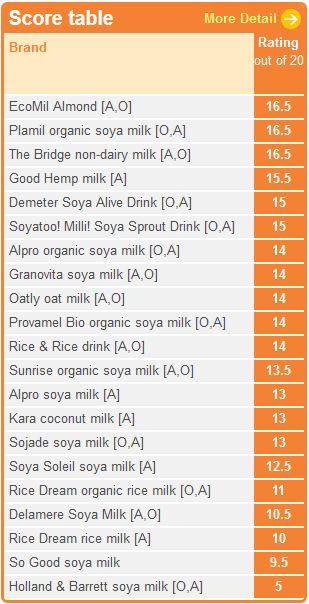 This table shows ratings based on the Nov/Dec 2012 Ethical Consumer Report and recalculated on 21/01/2015. Some of the commentary below refers back to the 2006 guide.

Plamil milk is produced in the UK from carefully sourced organic soya beans. They are a small company with a commitment to premium prices for producers. Being an all vegan company, Plamil tops our list.

Plamil (then Plantmilk Ltd) was created in 1964 to manufacture a non-dairy alternative to milk. After considerable research Plamil was the first company to widely sell/distribute soya alternative milk in the UK.

Plamil are proud of the fact that all the energy they use to make their products, even to run their computers, is sourced from 100% renewable sources.

In the 2006 Ethical Consumer report other relatively ethical brands Sunrise, Sojade and Oat Supreme came out well because their raw materials came from European sources, with Sunrise and Oat Supreme getting an extra mark for being produced by totally vegan companies.

In 2009 Provamel/Alpro was bought by Deans Foods, the largest dairy company in the USA, who also bought White Wave Inc. in 2002.

The Ecological impact of soya milk

Ethical Consumer Subscribers have access to over 170 buyers’ guide reports scored according to 23 ethical categories. Roughly speaking, a score of 15 to 20 is good; 10 to 14 is average; 5 to 9 is poor and 0 to 4 is very poor.

On 26th January 2015, we received the following reassurance from the makers of Koko Dairy Free:

“The coconut milk based milk alternative Koko Dairy Free is regularly displayed at vegan food fairs. This non-soya milk alternative seems to work well in coffee and the taste seems to go down well with the public. The product is produced locally in Europe using coconut milk sourced from the parent company based in the Far East.

“Koko Dairy Free does not produce any products using animal derived ingredients or known allergens, as their philosophy is to provide products that help consumers with dietary or ethical preferences to be able to use Koko branded products without any concerns. Because some of their consumers are non-vegan some of the recipes section of their website do contain meat and fish, but they also provide vegan suitable recipes. Please contact us [Veggies or Koko] if you can offer any further info.”

I used Google translate on the Sojade website and am thoroughly impressed. They use solar panels and are planning their own wind turbine! They also use electric vehicles and hybrids. They sound brilliant and we would do well to promote them and encouraging people to stock their full range. I can vouch for the quality of their yummy yoghurts.

HOWEVER…. They also do organic animal products!

As a French company in this industry they stand out and perhaps they need encouragement, or even communication about the fact that this is our concern. The website explains the concept of soya and gives recipes, implying the whole concept is pretty unusual there?

Sojasun is, with Sunrise and Oat Supreme, second only to Plamil on the Ethical Consumer non-dairy milks report and Sojasun tops their Buyer’s guide to yoghurt category. Sojasun and Sojade are owned by the same company, which also produces organic cow’s, sheep and goat’s cheeses and yoghurts.

Sojade is based in Brittany, and they are good on traceability. The Ethical Consumer puts a high emphasis on European producers, so on this count Sojade would also do well and there is also likely to be little worker exploitation due to EU laws being applicable.

I think the flavour of any replacement for Provamel is pretty important. From a welfare perspective, the other brands of Sojade’s parent company are still better than the mega dairy owners of Provamel/Alpro. Plamil is obviously the ideal in being vegan run, but from Veggies’ eco perspectives at least, Sojade is a pretty sound runner-up.

Sunrise appear to be part of the multinational Canadian group, Sunrise, which is over 50 years old. They have a partnership arrangement with Dairy Crest. They also do “Café Expert”, which is a non-curdle soya milk designed for the fast food market – which may be handy.

“Having seen your Oat Supreme highly rated by the Ethical Consumer I asked our wholesaler if they could stock it for us, but they had heard that it was out of production. This seems to be confirmed by the discussion on the Dairy Free UK Forum.

We would be pleased to hear if you are back in production now or in the future.

In September 2010 it was reported that some Oatly products were not vegetarian, as they contained vitamin D3, which is of animal origin.

This quote was from Oatly at that time:

“Thank you for your inquiry of Oatly. We have four products available on the UK market. Two of them are suitable for vegans, Oatly Healthy Oat Organic 1 litre and Oatly Healthy Oat alternative to cream 250 ml. The other two which are Oatly Healthy Oat Enriched and Chocolate, they are both enriched with vitamin D3 which is derived from sheep’s wool fat. We have chosen D3 because so far clinical studies have shown that D3 is better absorbed in the body and therefore recommended by the Swedish FDA to use for enrichments.”

According to a discussion on the veganforum:

The following reassurance appears on the Oatly website, as at 29th January 2015:

“Everything we make is based on plants. Absolutely nothing has anything to do with the animal kingdom whatsoever.”

We at Veggies are impressed by the ethics displayed by the company. In particular we commend them for standing up to attempts by the Swedish Dairy Industry to sue them for speaking the truth about the dairy.

Provamel/Alpro bought by the largest dairy company in the USA

Provamel/Alpro have been bought by Dean Foods – a dairy company (the largest in the USA).

“Dean Foods is one of the leading food and beverage companies in the United States. The Company’s Fresh Dairy Direct business is the largest processor and distributor of milk and other dairy products in the country.” June 2009 press release.

Reuters reports:
“Dean Foods, the largest U.S. dairy company, became a major player in the soy category in 2002 when it bought White Wave Inc., the maker of Silk soymilk. Alpro has two soy product brands: a namesake one for retail and Provamel, which targets the specialized health channel with organic products.”

According to Wikipedia (Nov 1st, 2010), “the Provamel brand is reserved exclusively for organic products (including many organic versions of Alpro Soya products), which are intended for sale only by independent health food retailers.”

By marketing cheaper non-organic Alpro products in supermarkets, and more expensive organic Provamel products only to independent health food retailers, this creates a perception that independent retailers are not competitive with supermarkets.

Using soybeans to make milk instead of raising cows may be ecologically advantageous, because the amount of soy that could be grown using the same amount of land would feed more people than if used to raise cows. In the case of organic meat, this is debated, as grazing land for animals, requiring fewer pesticides, is very different from land used to farm. However, with organic food sales at 1 to 2% of total food sales worldwide, this comparison is negligible at present. Moreover, cows require much more energy in order to produce milk, since the farmer must feed the animal, which consumes 40 kilograms (90 pounds) of food and 90 to 180 litres (25 to 50 gallons) of water a day,[13] while a soy bean needs merely fertilization, water, and land.[not in citation given] Because the soybean plant is a legume, it also replenishes the nitrogen content of the soil in which it is grown.

The inclusion of at least 25g of soya protein per day as a part of a diet low in saturated fat can help to reduce cholesterol in the blood. There is on average 32g of soya protein in every litre of Plamil milk, and it contains: