Veggies Catering Campaign was set up in Autumn 1984 by four friends who were frustrated about the lack of vegetarian fast food available in Nottingham. Their intention was both to provide an ethical fast food stall in the city, and to take the veggie message to a wider audience by participating in demonstrations and gatherings. One of the first things the founders did was to take a giant veggieburger along to a Vegetarian Society protest outside the infamous Royal Smithfield show! 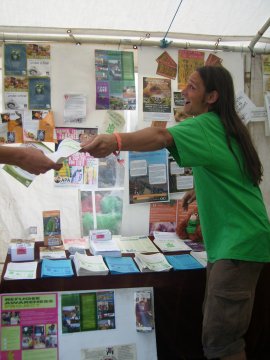 Veggies has grown and evolved a lot since 1984, but has remained small, streetwise, volunteer-led, community based and committed to spreading the ethical message.

Veggies has compiled the national Animal Rights Calendar for over 30 years, with the addition of the Sumac Diary & Vegan Outreach Diary from 2004, whilst the first, handwritten version of our Animals Contacts Directory from 1988 was recently unearthed in our archives!

We were helping to run the Nottingham’s Sumac Resource Centre 15 years before it even existed, having taken on the day-to-day work of the Rainbow Centre, as it was then known, back in the nineties.

Veggies has a tightly packed events diary with the co-op providing food in all sorts of situations, from carrying boxes of samosas and cakes on protest marches to catering for festivals, fairs and family celebrations. On all these events we do as much campaign outreach as possible, often dependent on the help available. That’s where you come in ….

You can find further information on various aspects of our campaigning below:

Visit our blog for various other campaigns