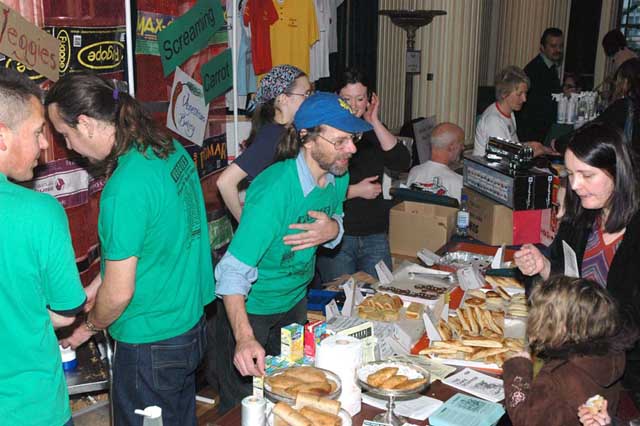 For 6 years, from 2005 – 2009, Veggies and other vegan campaigners organised of the East Midlands’ Vegan Festival, which on most occasions welcomed 2000 or more members of the public to the Council House on Nottingham’s Old Market Square.

At the time there were probably only 5  vegan festivals being held each year so we are delighted to see that in 2017 there will be over 60 Vegan Festivals and Fairs including the Nottingham Viva! Vegan Festival at Nottingham Conference Centre  on Saturday 6th May.

Since 2010 the Vegan Festival team has been working on other projects, including regular Free Vegan Food Giveaways and associated cookery skillshares and the Vegan Beer Festival, as well as providing vegan catering and campaigning at many Veggies Events. 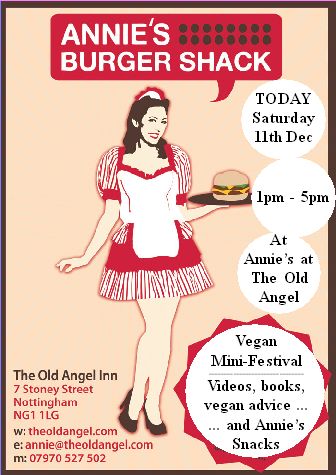 However the Council House have refused to host further EMVFs, so – in order to try and continue maintaining public engagement – Nottingham’s vegan campaigners pledged to hold 10 Vegan Free Food Give-Aways throughout the year instead, each aiming to reach 200 members of the public.

So far this year, we have held nine give-aways and we will be holding our final one of the year on December 11th: the day that that the East Midland’s Vegan Festival would has taken place in previous years. We have decided that, due to our difficulties in finding a central venue to re-home the festival, we will take it to the streets – and host an extra large give-away, with stalls across the city centre.

It is important to note that campaigning for political purposes and on behalf of registered charities, such as the Vegan Society, gives exemption from Council by-laws against the distribution of campaign literature; this has been tested on numerous occasions, resulting in the enthusiastic support of street wardens, the police and Council officers.

Throughout the year the free vegan food give-aways have been sponsored by the Vegan Society, supported by many local and national companies and held in various Nottingham City Centre locations, including outside the Council House, near Mcdonald’s, and at Nottingham Trent University.

Due to the give-away events being such a positive and enjoyable way of promoting healthy, compassionate and climate friendly vegan food, a large and committed team of helpers has been built up. So much so that we believe that for the December 11th give-away 10 such stalls could be held, across the city centre: thereby recreating the impact of the EM Vegan Festival on a single day.

We have been contacted by various local businesses who have been asking about this year’s festival,
and have been very disappointed when we have informed them it is not going ahead. As a result, we are asking all of the businesses who have been involved in previous years if they would like to provide food samples for stalls in our free-food festival instead. When people try the food, we will explain where it is from, and provide leaflets/promotional material from the business that has donated the food. Throughout the year, this approach has always succeeded in generating a huge amount of public interest from the public about the food that is being distributed.

Thank you for your time, please contact nottsfreefood[at]gmail.com if you are interested in providing some food samples for the day, or helping out in any other way.