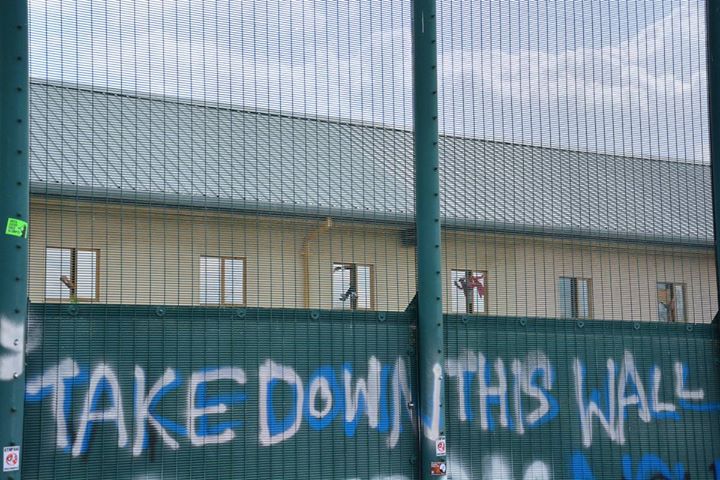 SHUT DOWN ALL DETENTION CENTRES

Movement for Justice have held 11 demonstrations at the notorious Yarl’s Wood immigration detention centre. With every demonstration there is more vibrancy, more anger, more determination – with ex detainees, asylum seekers, feminist and anti racist activists from around the country demonstrating right at the fences of Yarl’s Wood.

The women behind the fences join the demonstrations from their rooms with handmade banners, signs, ribbons of toilet paper, their arms and legs – deifying guards threats to express their rage and determination for freedom. We come together and everyone leaves feeling stronger and more determined.

The Surround Yarl’s Wood demonstrations are palpable, direct and visibly impactful acts of solidarity. They give the women inside the strength to continue their daily resistance to racism, sexual abuse, deportations, and inadequate mental and physical healthcare. They have also inspired a whole generation of new young activists across the country to take up the fight against detention, the brutalities and racism of the immigration system and borders.

In Yarl’s Wood 400+ women are indefinitely detained, most of whom have experienced rape, domestic violence, torture, forced marriage, sexual abuse, FGM, persecution due to sexuality. Many of whom have long and deep connections to the UK, have been here most of their lives, have all their family and friends here. Many have children; some are pregnant, elderly, disabled, sick and have mental health difficulties.

Yarl’s Wood has been exposed time after time in undercover investigations, government reports, inspectorate reports, and inquiry findings for sexual abuse/harassment by guards towards the women. Undercover footage by Channel 4 news showed the brutal, racist attitude of the guards.

These demonstrations keep Yarl’s Wood on the national agenda, they make it clear that there is only one solution – SHUT IT DOWN

GET YOUR TICKETS FOR THE NOTTINGHAM & LEICESTER COACH HERE!