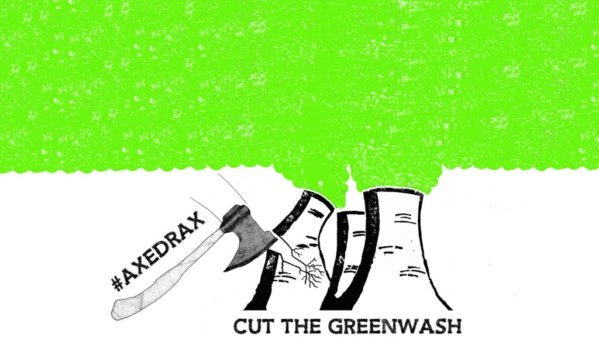 On 22nd October, activists against coal, against forest destruction for bioenergy, and for climate justice will be protesting outside the UK’s biggest power station: Drax in North Yorkshire.

Drax burns more wood than any other power station in the world, and more coal than any in the UK, causing climate change, forest destruction and human rights abuses.

10 years ago, Drax was the site of the first Climate Camp, a direct action movement against the root causes of climate change. Several hundred people camped in a field ‘in the shadow of Drax’ to take part in a week of discussions, workshops and, above all, protests against the country’s single biggest carbon emitter. It was the start of six years of annual Climate Camps and year-round actions and protests against those most responsible for causing climate change in the UK, and experience which has continued to inspire and inform ongoing actions for climate justice …more…

Bring your banners, costumes, placards and voices – and make it clear that Drax’s greenwashing of biomass has to stop. Veggies Catering Campaign will be attending and will provide vegan burgers and cakes, as well as tea. There will be a theatre performance (a performance of “Buried Sunshine”), and speakers.