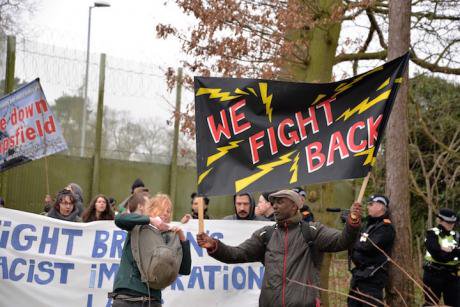 Coach from Nottingham:
PICK UP AT FOREST PARK & RIDE
Coach will be leaving at 10.30am sharp.

Let us know if you will be organising a coach from another city.

#SHUTDOWNMORTONHALL is open to all respectful groups and individuals.

This is a Shut Down Morton Hall Campaign event, get in touch with us know if you’d like to be involved with organising and planning.

There have been FOUR deaths at Morton Hall in a year, the most recent being 38 year old Jamaican man Carlinton Spencer who died on 2nd October and on 19th November the death of 27 year old Iraqi Kurdish man Shadad Zraw Aziz.

Since 2000 the death toll of those who have died in immigration detention or shortly after release stands at 43. (Medical Justice) Morton Hall is run by the Prison Service for the Home Office and can detain 392 people. The Prisons Inspectors on 21 March reported on Morton Hall: “Nearly half the detainees told the inspectors they felt depressed or suicidal on arriving at Morton Hall.”

JOIN US ON 28 APRIL NEXT WITH YOUR BANNERS AND NOISE, TO SURROUND MORTON HALL AND DEMONSTRATE OUR SOLIDARITY WITH PEOPLE DETAINED THERE.