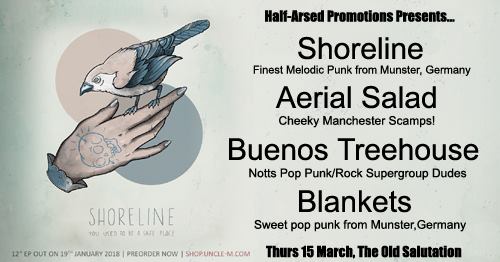 Half-Arsed Promotions returns for another night of grade A punk rock. This time we’ve gone European!

Shoreline
Forming out of the flourishing DIY punkrock scene in Münster, Germany, Shoreline have been touring all over mainland Europe and the UK since 2016.

With a fast paced to mid- tempo punk sound for fans of Gnarwolves, The Flatliners or The Menzingers, the band has since logged countless hours on highways between London and Prague, playing everywhere from clubs, to festivals and dive bars.

Shoreline´s debut EP „YOU USED TO BE A SAFE PLACE“ will be released via Uncle M Records (The Smith Street Band, Hot Water Music etc.) in early 2018 and was recorded in the Kaputtmacher Studios in Bochum, a place well known for its work with bands like Anti Flag, Blackout Problems, FJORT or Apologies, I Have None.
https://www.facebook.com/shorelinepunk/

Aerial Salad
Manchester Punk Rock Sad Boys. These lads are quickly making a big name for themselves in the UK punk rock scene, and rightly so. They just released the album of the year, as far as i’m concerned. We are really chuffed to have them come back for their second Half-Arsed appearance. Go buy the record!
https://aerialsalad.bandcamp.com/releases

Buenos Treehouse
Nottingham’s very own pop punk/rock supergroup, featuring members of Arse Full Of Chips, Gone And Lost It, The Rutherfords and The Sneaks! FFO The Social Club, Weezer.
https://buenostreehouse.bandcamp.com/

Blankets
Sweet pop infused upbeat punk from Muntser, Germany. They are the odd ones, apparently…
https://blanketsband.bandcamp.com/