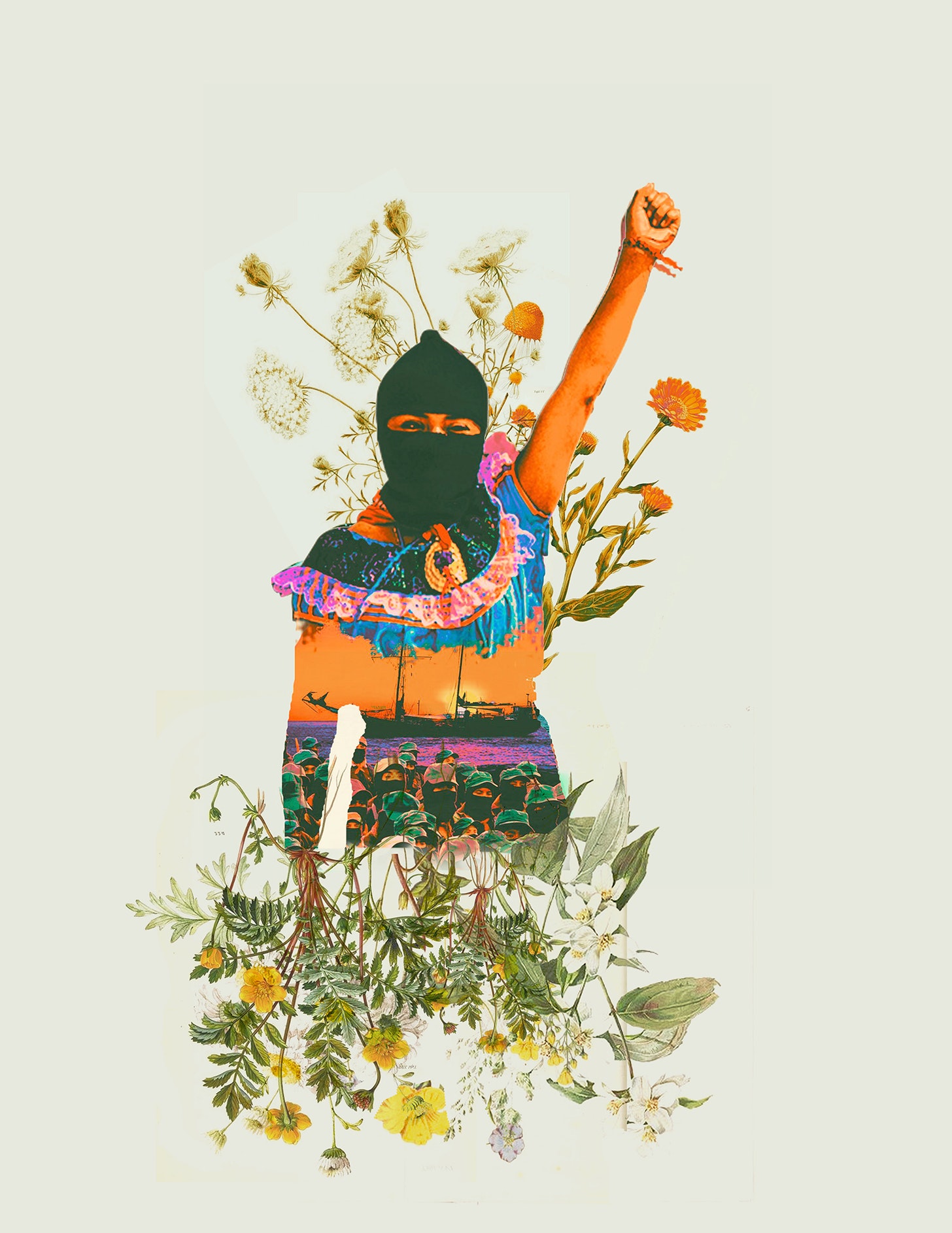 What is the ‘Journey for life’?

On 1st January 2021 Indigenous Mayan Zapatistas published a declaration for life announcing an ‘invasion’ of Europe, a mission of solidarity and rebellion to mark 500 years since colonisation. The objective of this “Journey for Life” is to have meetings, dialogues, exchanges of ideas, and experiences with all who are committed, from different perspectives and fronts, to dismantling capitalism, as well as patriarchy, racism, imperialism, colonialism, and other violent systems that destroy life.

The North of England and the Midlands section of the tour will only be 4 days – 28th to 31st October.

We will host a visit of a 7-person delegation at Nottingham’s Sumac Centre on Thursday 28th/Friday 29th. They will take a day trip to Bradford on the Thursday but we invite all interested groups and individuals to contact us to get involved to make the most of this unique once in a half millennium opportunity! We have space for people from around the region to relay their stories to the Zapatistas, but also to meet and network with each other. There is space to stop over before and/or after if that helps people traveling from outside of Nottingham.

Restrictions: The Zapatistas are very strict about anonymity and also about COVID security, given how badly it would affect the international tour if any of them were to catch it. This Guidance document gives you an idea of their requirements and an idea of the kinds of things they want to hear about and speak about.

There’s also a crowdfunder and an Etsy shop in solidarity with the Zapatista Journey for Life .

You can read more about the ‘Journey for life’ at: https://viajezapatista.eu/en/

More background on the history & struggles of the Zapatista communities may be found at Veggies’ Zapatista Coffee page.

21 years ago Nicki was a human rights observer in #Chiapas, Mexico in #Zapatista & Las Abejas communities.
Nicki's photos are on display at #SumacCentre for the Zapatistas #JourneyForLife delegation at Sumac on Thurs/Friday 28/29thhttps://t.co/KmYmj6TYeN pic.twitter.com/Zv3UDC0vbL

On their “Journey for Life” #Zapatista delegates will exchange ideas with activists & collectives, initiatives, groups & projects of the movements of an “Other Europe”

We hope to welcome them to Nottinghamhttps://t.co/rc4PI7AsK3

The Zaps will be traveling from Bristol to Nottingham late Wednesday evening then to Barnsley early on Thursday 28th Oct for a union hosted meeting with Orgreave  miners and more (see below)..
They come from there to Nottingham Thurs evening to stay over at Neds Housing Coop.

Neds/Sumac/Veggies are hosting for the entire Midlands/Yorkshire/NorthEast region, inviting folk from all over to meet up here.

There will be a session at Neds on Thurs evening about coops, including the  Radical Routes Network.

There will more sessions at Sumac on Friday 29th October

Fri AM may cover the history of Sumac, Nottm campaigns & related topics, perhaps including indymedia, (zapatista inspired) anti-capitalist campaign in the 90’s, climate action in the 00’s, spycops/ mclibel/ and more that you and others might be able to add to the list.
Friday PM will start with a presentation from the Zaps about there uprising and their current worldwide fact-finding mission. This will follow into a focus around land rights, headed up by the Landworkers Alliance and perhaps travellers issues might fit in here.

The evening may be more social and informal as early the next morning they travel from Nottingham to Liverpool/Manchester and then down to Stonehenge (direct action campaigns, HS2 etc) and on to London (inc Netpol etc)

We would love for people and projects from across the Midlands, Yorkshire and the North-East to meet with the Zapatista delegation which is touring the UK & Ireland at the moment. For example people from Our Future Leeds/Leeds Climate Action going to join their day in Nottingham on Friday 29th October, together with members of the Landworkers Alliance.

Here’s some Zapatista background:
The Zapatista National Liberation Army (EZLN in spanish) is an indigenous Maya organisation from Chiapas in the southern mountains of Mexico, who, in 1994, claimed autonomy from the Mexican government in multiple communities in Chiapas – they have managed to maintain these autonomous areas ever since.  Their struggle is against neo-liberal capitalism/earth destruction, against the discrimination against and repression of indigenous peoples, and in favour of dignity, women’s equality and sovereignty over land and food.

The Journey for Life is a fact-finding and relationship-building mission – 200 Zapatistas have come to Europe to meet people/groups/communities ‘from the left and below’, to find common ground, to explain more about their historical and current struggles, to find out what life is like for people in resistance here and to build alliances.

We, some individual Zapatista supporters in the North/Midlands, planning the tour in our region, are hosting a delegation of 6 Zapatista men.

The tour programme has been drastically cut due to the new COVID travel restrictions, so we now only have 2 days in Yorkshire/Midlands, of which one day (the 28th in Barnsley) is devoted to union and community organising past & present, the legacy of Thatcher and the miners’ strike, police infiltration (Orgreave) and co-operative intentional communities.

Nottingham, 29 Oct:
That leaves us one day (29th) for other groups from the North East and Midlands and for issues not covered by other host locations.  We hope our day will include some municipalist strategic projects, some land-related stuff (Land Workers Alliance) and bits and bobs of other stuff, perhaps including solidarity economy and perhaps including a couple of folks from a traveller organisation.

We encourage all participants to attend for as much of the day as they can.  We are developing a loose programme where each topic/project is covered at a roughly set time and that the Zapatistas will talk about their history, principles and political strategy for a couple of hours in the middle of the day.

It’s helpful for the Zapatistas to understand the difficulties that nearly all political projects on the left are grappling with, so come along with a critical perspective when you join us.

The discussions will be held between Neds Housing Co-operative and the Sumac Centre co-operative Social Club in Forest Fields.

Restrictions: The Zapatistas are very strict about anonymity and also about COVID security, given how badly it would affect the international tour if any of them were to catch it.  I attach sections of the Guidance we’re working from, to give you an idea of their requirements and an idea of the kinds of things they want to hear about and speak about.