Critical Mass is for everyone who rides a bike in Nottingham.

In short, “we are not blocking the traffic – We are Traffic!”

Nottingham Critical Mass is a mass cycle ride, with no particular route, except where we want to go. We ride on the last Friday of every month.

So, meet us to leave at 7pm outside the Bell Inn, Old Market Square, Nottingham (opposite end of square from council house).

Last but not least, join us to enjoy a fun and sociable bike ride. 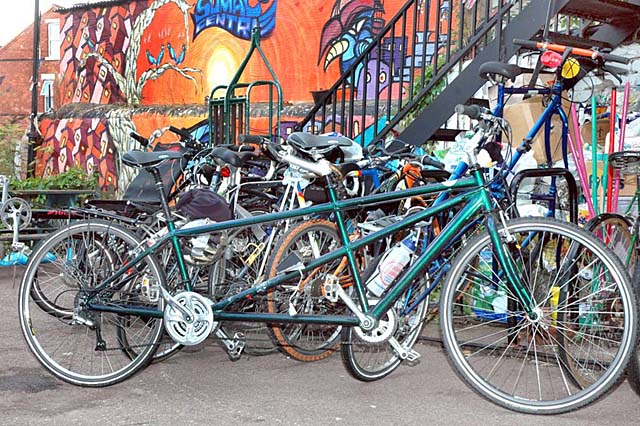 Dress up or down as much as yer like, but try at least bring a monster mask and some dancing shoes!
We meet in the Market Square on the island between the tram lines and the Bell Inn. We leave at 6:30pm by following the person in front or if your in front you go where yer like!
At some point we’ll head back to the square and suggest we head to the secret after party!
This after party will have NCM’s very first techno ceilidh as well as the usual fire fun. So be ready to grab yer monster partner an take them on a spin!
Bring yer own food,drink and whatever else you want to the party.
NCM putting the fun back between yer legs.

It’s time for us to take over the streets of Nottingham with our reggae powered bicycle sound systems….
Just meet at 6:30pm in the Market Square on the little island between the tram lines and the Bell Inn. Come on a bicycle.
No route necessary we just follow the person in front and if you are at the front then you go where you like!
At some point though we’ll head back to the square and suggest we head over to the secret after party!
The after party will be held in Shamilla’s honour as she turns 31 today! It will be held in a low light pollution area as it is also the peak of the Delta Aquarids meteor shower! There is a spot for wild swimming, so bring whatever you feel comfortable swimming in, if yer want to do that. We’re going to celebrate Shamila’s 31st year with a wood fired vegan/vegetarian BBQ.
Bring yer own food,drink and whatever else yer need to party!
NCM puts the fun back between yer legs!

Space for Cycling Ride to Party

On the 22nd of April rides will be taking place across the country to promote safer cycling in the run-up to the local elections on the 4th May.

The national Space for Cycling campaign aims to create the conditions where anyone can cycle anywhere.

Rest stop about half way and finishing at County Hall at around 13:00 for a picnic

Veggies aim to bring/send food & drink, but have other commitments on the same day, so anyone that can help take food along, please contact Veggies. Please bring your own too, so we can have a picnic by The Trent.