The 2020 AGM will be at 1 pm (with registration starting at 12.00 noon) on Saturday 30th May in Glasgow at the Lighthouse conference suite, just 3 minutes’ walk from Glasgow Central train station.

The Vegan Society’s AGM is the perfect opportunity to meet our staff and volunteers, enjoy some free vegan treats, generously donated by our Trademark holders, and hear more about what the Society has planned. Whether you’ve been a member for years or are completely new to The Vegan Society, you will receive a very warm welcome from all of us.

Entry is £4 payable per day on the door (under 16’s free) or £15 for VIP tickets in advance from eventbrite to include fast track entry and a goody bag full of vegan products, samples, discounts and offers.

To book a stall, sponsor, host a demo, talk or workshop or find out more information please email veganeventsuk@gmail.com

Entry is £3 payable per day on the door (under 16’s free) or £15 for VIP tickets in advance from eventbrite to include fast track entry and a goody bag full of vegan products, samples, discounts and offers.

To book a stall, sponsor, host a demo, talk or workshop or find out more information please email veganeventsuk@gmail.com

There will also be some fabulous talks and demos on from some amazing people and businesses. You can find out more information about these on our website at veganfestival.co.uk

For information about exhibiting, speaking, sponsoring the festival, volunteering on the day or anything else please email enquiries@veganfestival.co.uk

Details to be announced,

WHAT IS V IN THE PARK?
In our humble opinion, we think we may have the best vegan community in the whole world! We want to come together and celebrate this at Scotland’s first ever outdoor vegan festival – V in the Park!

With delicious food & drink, camping, talks from inspirational speakers, stalls and live music & comedy, we invite you to bring friends and family to a guilt-free weekend.

When our campaign launches, we only have 60 days to reach our ambitious target. We need your help!

TICKETS
Help fund us and sign up for Early Bird tickets here:
https://www.indiegogo.com/projects/v-in-the-park-2018-food-camping/coming_soon

WHERE AND WHEN?
Fri 6th – Mon 9th July 2018
The perfect location for the festival will be at Cardross Estate, Port of Monteith. Easy reach from Glasgow, Edinburgh & Stirling with enough space for us to grow in the future! 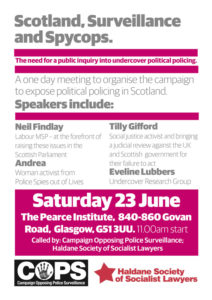 Come and hear from those at the heart of exposing Britain’s political secret police and campaigning for truth and justice for those spied on in Scotland.

The scandal is the subject of a full-scale public inquiry – but only for events in England & Wales. Although many of the officers were committing the same abuses in Scotland for decades, the Home Office has refused repeated requests from the Scottish Government to extend the inquiry.

Faced with this, the Scottish Government commissioned an organisation of career police officers, HM Inspectorate of Constabulary in Scotland, to produce a whitewash report.

If Scotland is to be excluded from the London inquiry, it must set up its own.

Come and hear from people who were spied on, the researchers who have been unmasking spycops, and stalwarts of the campaign for truth and justice.

Neil Findlay MSP has ensured that the Scottish parliament has had two debates on the scandal which he led with powerful, eloquent contributions.

‘Andrea‘ is a Scottish woman who was deceived into a long-term relationship by undercover officer Carlo Neri in 2002. They met on an anti-war demonstration, and she was involved in trade union, socialist and anti-racist campaigns. They lived together for two years and got engaged. She is now bringing legal action against the Metropolitan Police and campaigning with Police Spies Out of Lives.

Tilly Gifford is a social justice activist who was targeted by undercover political police in Scotland. She is bringing a judicial review of the UK and Scottish government’s refusals to have an inquiry into spycops in Scotland.

Eveline Lubbers is a researcher and writer for the Undercover Research Group who have been meticulously investigating Britain’s political secret police, exposing officers and mapping the methods. Their work has been at the forefront of highlighting the failings of the official investigations.

The meeting has been jointly organised by the Haldane Society of Socialist Lawyers and the Campaign Opposing Police Surveillance.

Great ‘v’ food and living is for everyone… so whether you live a full time ‘v’ life, or are simply going meat-free on a Monday, this show delivers an incredible day out you will not want to miss!

Twas the night before Christmas, when all thro’ the house not a creature was stirring, not even a mouse, when from the lawn there came a big crash Vegan Connections is back with a yummy Christmas bash.

Join us for festive fun, treats and handmade gifts at the stunning Briggait this winter at the Glasgow Christmas Vegan Festival on Saturday 9th December! Promising a delicious blend of carol singing, mulled wine and Yuletide spirit, Vegan Connections invites you to shake off those winter coats and enjoy the festivities with a vegan twist.

Following on from the Market at The Briggait we’ll have an evening gig at Mono (more details to come soon).

The Edinburgh Vegan Festival, a.k.a Edinburgh’s Ethical Winterfest, returns to the The Roxburghe Hotel on 19th November 2017

If you are vegan, vegetarian or just interested in a more compassionate, cruelty free and healthier way of life, please pop along and see us, you wont be disappointed.

Stalls will include a wide variety of vegan friendly foods, along with charities, cruelty free clothing, wines, face painting for the kids and of course a selection of talks an screening to entertain and educate.