People’s Kitchen – Punk for the Homeless

On the last Saturday of each month People’s Kitchen is part of a fundraising evening for Punk for the Homeless, to raise awareness and money for Casa Alianza, a homeless charity for street children in Latin America.

People’s Kitchen is a community café where people can get a good vegan meal for a suggested donation.

Half funds raised keep the Sumac open, and the other half are fundraisers for grassroots causes, nominate by the group running each evening.

As an Ecology student, I’ve been given the incredible opportunity to volunteer with Operation Wallacea – an international non-profit conservation research organisation – on one of their recently created marine reserves. The aim is to take part in pioneering research on coral reef structure and ecosystem functioning within the reserve area, with hopes of conserving and protecting this fragile habitat. However, as this is a non-profit project it wouldn’t be possible without a little fundraising. Lovers of science, nature, life : any contribution, big or small, is much appreciated – you’ll be helping to support the preservation of a beautiful and vulnerable ecosystem!

For more info or to donate see https://uk.gofundme.com/opwall-research

Defend our right to protest!

Fundraiser  to raise vital funds to fight the IGas injunction which aims to remove our rights to protest.

The Sumac garden has been turned into mini community allotments! The vegetable beds are divided up in to small plots. Individuals and groups can request this space to grow fruit, vegetables, herbs, and flowers for local wildlife.

Local food production is an important part of a low carbon society. We want to encourage, support and learn about food growing in Forest Fields. The Sumac garden is organic and laid out to show the best use of a small space. It is full of ideas you could use to grow your own.

There are still mini garden plots available in the Sumac garden for groups or individuals to grow their own fruit and vegetables. People are welcome to take on a space to grow over Winter veg or express an interest for next Spring!

If you are keen to get involved join us on Wednesday afternoons, or just pitch in on your own initiative.

Sumac meetings are currently held at 5.30pm on the 1st Monday of each month.

All are welcome to come and participate. To get involved just drop by and join in!

The Sumac Centre is an independent community and social centre in Nottingham, home to project including the Forest Fields Social Club, People’s Kitchen, Veggies Catering Campaign and Punk 4 The Homeless.

Sumac aims to use a consensus process, to work creatively to include everyone decision-making. To find out more about this, see the ‘Groups and Meetings’ briefings at Seeds for Change 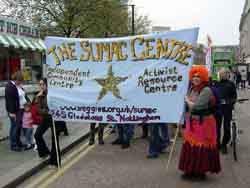 Sumac Committee meetings are held at 7:30pm on the first Monday of each month but this one in November 2017 has been moved to Saturday 11th November at 7pm at People’s kitchen on a trial basis.

All are welcome to come and participate, but only members of the committee will have decision making powers. If you would like to apply for membership (having been a Sumac Volunteer for a couple of months) please request an application form which details commitments and responsibilities to membership.

To get involved just drop by and join in!

The Sumac Centre is an independent community and social centre in Nottingham, part of the UK Social Centre Network and Radical Routes.

Sumac aims to use a consensus process, to work creatively to include everyone decision-making. To find out more about this, see the ‘Groups and Meetings’ briefings at Seedsfor Change

Open mic returns to the the Sumac on a monthly basis (every second Friday of the month). A electric piano plus two electrics a bass and an acoustic guitar will be available to use. As will three guitar and a bass amp plus PA.
All welcome from beginners to pros 🙂